For the first book of my Top 100 Challenge I read Philip K. Dick's science-fiction novel, Do Androids Dream of Electric Sheep? 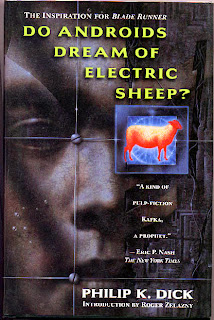 It took me a while to get through since I've been so busy lately, but the book is actually quite short at under 200 pages in the version I read.  Although published in the 60's, the language is still very readable.  I imagine this is probably because it was published for the masses rather than as a literary work.  With some books I have encountered from that era, the narrative style can be a little jarring in comparison to modern writing.  I did not have that problem with this book at all.

The main plot of the book follows bounty hunter Rick Deckard's mission to 'retire' a number of androids - a total of 6 who have come to Earth from Mars illegally.  It is not fully explained to the reader why the androids must be killed, that is, why it is illegal for them to be on Earth, until quite late in the book.  I found this confusing at first, as I felt like I was missing important information.  I suppose I immediately felt sympathy for the androids and therefore wanted to know why they had to be put to death rather than just deported.  However the late reveal was probably done to mirror Deckard's initial nonchalance in terms of his task at hand -  the reasons aren't important, it is simply his job.

Eventually Deckard does start to rethink his mission, and this reflects the major theme of the question - the value of life.  The way in which the author has made animals the most valuable commodity in a post-apocalyptic society where animals and the environment have barely survived, creates a good juxtaposition to the protagonist questioning the value of the androids' lives.  This is a particularly difficult thesis as the androids are almost identical to humans, except that they lack empathy.  It can be so difficult to tell an android apart from a human that it can only be verified 100% via certain methods, such as a bone marrow analysis.

I did feel that the androids were far too easy for Deckard to kill.  Perhaps this was done on purpose, to show that the androids really are very close to humans.  But I felt that, as this is fiction, I wanted a little more action.  A little more cat and mouse.  After all, the pop cultural understanding of robots is that they are generally very strong and faster than humans.  From memory, I think Blade Runner delivered a bit more of that, at least when Harrison Ford is trying to take out the final two androids.  So perhaps part of my expectations came from my memory of the movie.  This sense of action-deficiency was the basis for my first mini-challenge, being a rewrite of one of the scenes in which Deckard kills an android.

I was quite surprised by how effected I was by the scene where the android Pris cuts the legs off a spider.  I'm not a big fan of spiders.  I probably don't hate them as much as I hate cockroaches but I am scared of them nonetheless.  Therefore you would think that I wouldn't care about somebody 'dismembering' a spider.   I suppose it's the way in which it was done - Isidore, a human, is in anguish because spiders are very valuable and he feels bad for the spider.  Pris decides to cut its legs off because she doesn't understand why it has 8 legs.  Figuring it only needs 4, she casually snips the legs off with clippers.  Later when the spider just sits there after being disfigured, another android puts a flame near it to make it move.  It made me very uncomfortable to read.  I suppose this for me was one of the most memorable scenes of the book, because it reflects the themes of life and empathy. 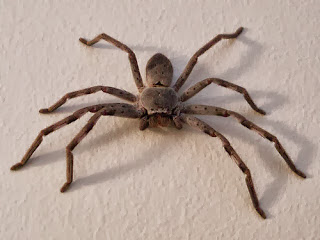 Yikes! Well if I've learned something from this book it's that I'm not an android because geez ... look how freaking terrifying this thing is.

There are a lot of other things that I could go into in terms of analysing the book, on which I'm sure there have been many essays written, but suffice it to say I would certainly recommend it to anybody who enjoys science fiction and/or possibly even detective fiction.  Overall I was quite satisfied with the book and it's a shame there aren't more Philip K. Dick novels on the list as I quite enjoyed his pulpy-yet-somewhat-literary style.  I think I will pick a fantasy novel next to mix it up.
Posted by Jannali Jones at 14:51